Thank you to C. from You’re Not Alone In This World for nominating me for the March Photo A Day Challenge! C. is such a wonderfully kind and talented person! The following are the photo challenges for each day! If you don’t want to do them all, you don’t have to. Please only do those that you feel comfortable doing. If you do choose to participate, feel free to let me know!

P.S. I think this challenge is really good for those of us with anxiety. It helps us challenge ourselves to get out of our comfort zones to get these pictures! 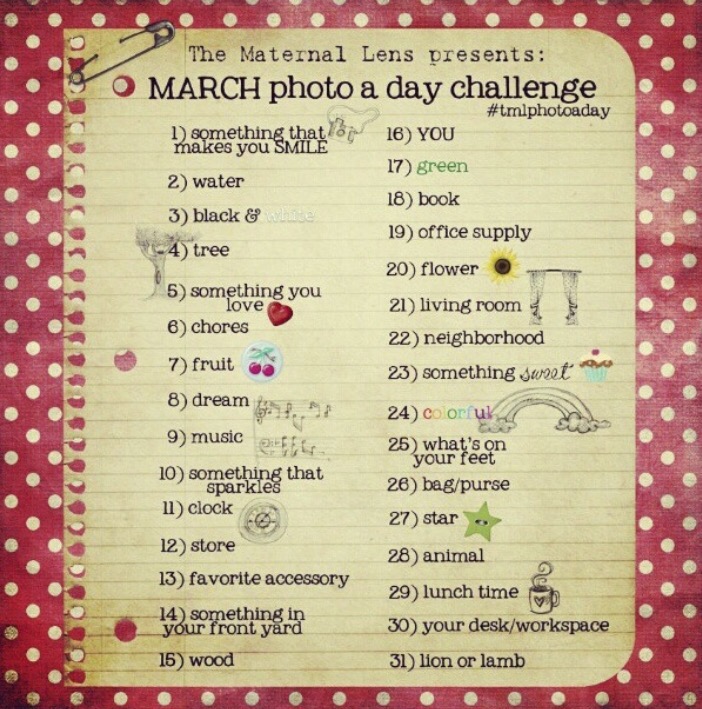 Matt from In Silence We Suffer

Kim from Peace, Love, and Patchouli

Carla from The Melodramatic Confessions of Carla Louise

Jen from Motivation For Today’s Reality

Miriam from Out an’ About

Anyone Who Wants To Participate!

I LOVE this and I can definitely relate! 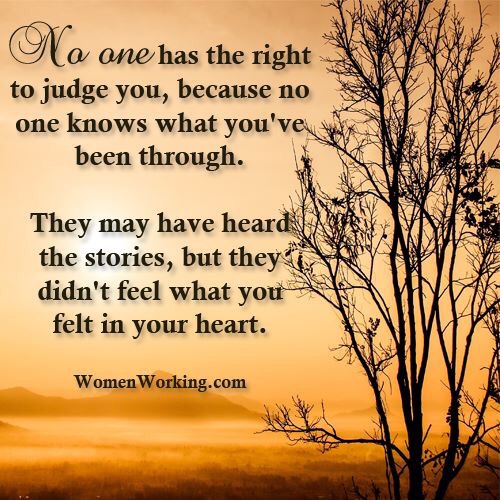 I’m in a bit of a musical mood this morning, so I thought I’d suggest some songs to help you feel motivated! You can check out videos to these songs by clicking on the links!

Wind It Up – Gwen Stefani – The Sweet Escape

Now That You Got It – Gwen Stefani – The Sweet Escape

*I know these songs are older, but Gwen Stefani and No Doubt have some great upbeat songs!

Paint It Black – Vanessa Carlton – Be Not Nobody (I know this isn’t originally her song, but I LOVE this version!)

*Like any of these songs? Have any songs that make you feel energized? Feel free to mention them in the comment section. Please do not post any videos though. I have nothing against other blogs that do, but I don’t wish for my blog to become really slow due to this. Thank you for understanding! 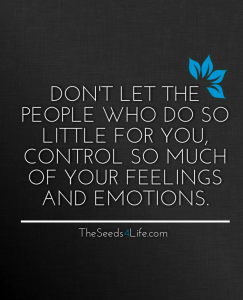 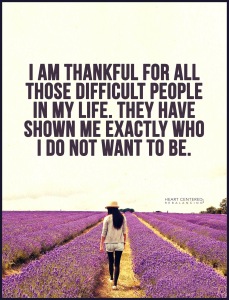 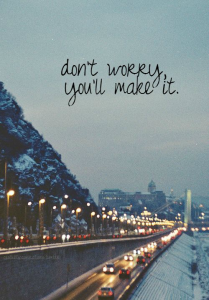 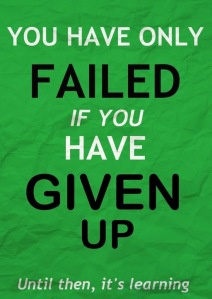 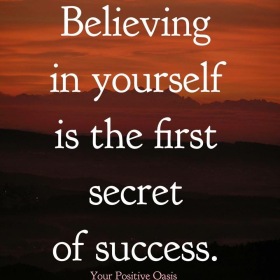 Most Images found on The Seeds 4 Life

When dealing with anxiety and other mental health issues, it can sometimes be difficult to have hope. I know that for me, while sometimes I feel extremely hopeful that I will get through my anxiety and be able to do the things I want, other times I feel the exact opposite.

However, I have lived with anxiety for so long now that it is sometimes difficult to see beyond it. I have tried for so long to get through my anxiety, and although I have made a lot of progress, I still struggle immensely. Sometimes I wonder if I find it difficult to do simple, everyday things, how will I accomplish bigger tasks?

We have to have hope though and the truth is, that we should. There is no real reason not to have hope. Why? Because we can get through our anxiety and other mental health issues! We just have to keep working hard and keep proving to ourselves that we are stronger than our obstacles and challenges!

I know this isn’t always easy. Sometimes we wonder how, if we’ve tried for so long to get better and still struggle, we’ll ever get through this. However, getting better is not an overnight thing and it’s not always something you can put a timer on either. It’s not always possible to say “in ten years, this will all go away”. Life doesn’t work like that. We just have to keep having hope and working hard on a consistent basis. We can and will get through this! 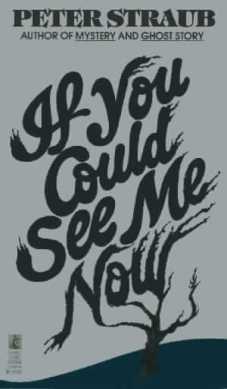 On July 21, 1955, two cousins make a pact that in twenty years, whether married or not, they will meet back where they grew up. However, what the two cousins don’t realize is that something will happen that night that will change their lives forever.

Twenty years later, Miles returns to the town where he grew up. While he says that it’s to write a book, he knows that the real reason for his return is much more meaningful, to meet up with his cousin.

Young women around town start to be found both killed and raped. Due to his slightly devious past, all eyes are on Miles. From the women in the stores to the farmers, side glances and rude remarks make their way towards the man who has returned after several years.

This is the first book I ever read by Peter Straub and let me tell you that I was impressed! From start to finish, the story keeps you on edge, wondering why everyone acts the way they do.

The characters in this book are easy to both fall in love with and hate. The book goes beyond examining the spiritual and strange, and shows just how truly interesting humanity can be. Not only does Straub talk about topics such as death and suspicion, but also about the human condition, the minds of criminals, secrets amongst humanity, and much more.

The way that Peter Straub writes this story is wonderful. He uses imagery well and while some images are disturbing, it evokes just how cruel some individuals can be. Also, as in many ghost stories, movies, and shows, the book studies the idea of the smallest towns being the ones with the citizens that hold the biggest, deepest, and darkest secrets.

While there may not be action in every single page, the good writing and the thrilling topics in this story such as humanity, suspicion, and paranormal activity, keep the reader more than interested. This is a good solid read!

This morning I was nominated for not one, but two blog awards from C over at You’re Not Alone In This World! Thank you so much, C! Please check out her wonderful blog. She is a very talented and caring person! 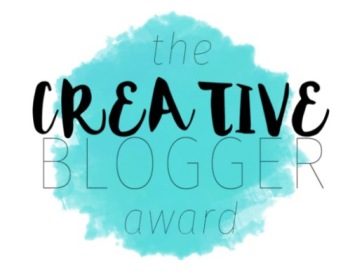 1.) I’m currently reading If You Could See Me Now by Peter Straub (great book so far!)

2.) My first pet ever (other than fish) was a rabbit and my most recent animal (who passed away) was also a rabbit.

4.) My favorite breakfast food are hash browns from McDonalds! 🙂

5.) I just ate at IHOP for the first time last year and was very impressed! (I had been there before but just with my mom and her friend and hadn’t actually had anything to eat).

The Nominees (As always, in no specific order) :

6.) The Melodramatic Confessions of Carla Louise

Really everyone who creates a blog is creative, but if I listed everyone, I’d never finish! To see if I’ve nominated you before for this award, click here! 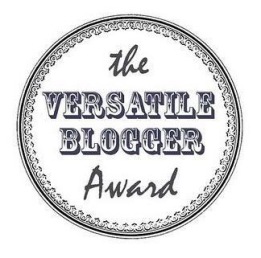 1.) My birthday happens to fall on a holiday this year!

2.) While I hate to admit this, I occasionally like newer versions of songs more than the originals (for example, I love the versions of The Beatles songs in the movie Across the Universe! I do like the original versions too though!)

3.) My favorite song from The Beatles is Come Together

4.) When I was younger, my mom didn’t want me to listen to Bryan Adams’s I Wanna Be (Your Underwear). I LOVE that song and now even have it on my iPod!

5.) My music interests have a lot to do with my parents’. I like some disco music like my mom and I like a lot of songs that my dad likes.

6.) I do NOT like Jazz music! To me, it pretty much sounds all the same! Trust me, I tell my dad who loves Jazz all the time!

7.) I love all animals, but I’m not a huge fan of gorillas and apes.

Have I nominated you for this award before? Check here!

A very good way to look at negative people. If you don’t like how they act, try hard to act differently! 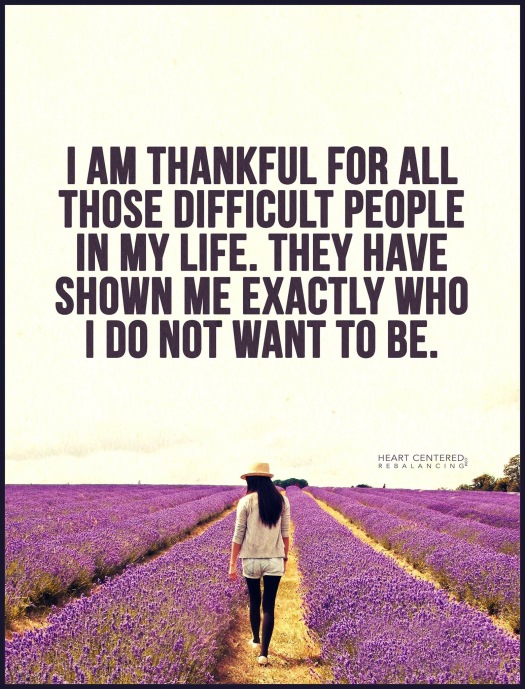 Okay, for today I’ve decided to post two quotes about writing. They’re both phenomenal so I wanted to share them both!

“Writing is not a matter of choice. Writers have to write. It is somehow in their temperament, in the blood, in tradition.”–N. Scott Momaday

As someone who loves to write, I can vouch for this. Sometimes I just feel the need to write!
“Good writing is supposed to evoke sensation in the reader – not the fact that it is raining, but the feeling of being rained upon.–E. L. Doctorow“

This is very true. While I sometimes find myself struggling with it, I think really good writing is when you feel as if you’re part of a story and when you can see with your mind’s eye what’s going on!

Today I nominate…
Olubukola at I am a woman and I can
Micheline at Micheline’s Blog
Poems, Expressions, and My opinions on Spirituality

A great idea! A way to connect with other writers and poets! Please visit Jen’s blog at Ink and Quill!

Share a link here of your favourite poem/s, which you have written or a poem written by a fellow poet. Or both!

A poem/s which may have moved you, or are close to your heart. A poem, you thought about, long after you finished reading it.

I will repost all links.

As you are probably aware. I love poetry. So I can’t wait to read and share your links.

I want to support my fellow bloggers, by sharing their work.

A small way of saying I appreciate you.

Never Underestimate the Power of Editing

Some people try to hide from their imagination. I, however, search for mine.

Where I talk about books and other randomness